At the moment of sex reassignment surgery (SRS), the ovarian tissue is sometimes cryopreserved as fertility preservation option for female-to-male trans men, also called trans men. During this preparation, cumulus-oocyte-complexes (COCs) can be found and in vitro matured. It is not known if these oocytes are developmentally competent. In order to use these oocytes for fertility preservation and subsequent fertilization, a normal spindle structure before and after vitrification is necessary.

A total of 680 COCs were collected from trans men (n = 16) at the time of SRS and after testosterone treatment. The COCs were subjected to in vitro maturation and those that reached the metaphase II stage (MII) were collected and split into two groups; group 1 was immediately fixed for spindle staining and group 2 was first vitrified and warmed followed by spindle staining. Statistical analysis was performed by Fisher’s exact test.

After 48 h in vitro maturation, 38.1% of COCs were at MII stage. Those oocytes were split in two groups: (1) 126 MII oocytes in the noncryopreservation group and (2) 133 MII oocytes underwent cryopreservation through vitrification. The oocyte survival rate, after 2 h warming, was 67.7%. Both the noncryopreserved and the vitrified group showed comparable results concerning normal spindle structure and chromosomes alignment, 85.7% vs. 92.2% (P = 0.27).

Spindle structure analysis and chromosomal alignment after vitrification seem normal in in vitro matured COCs collected during the tissue processing of ovaries in trans men at the time of SRS. The MII oocytes do not seem to be morphologically affected by prolonged testosterone treatment. 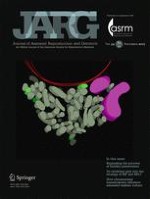 The relationship between fat and progesterone, estradiol, and chorionic gonadotropin levels in Quebec cow’s milk

Fertility treatment for the transgender community: a public opinion study

Assisted reproduction and risk of preterm birth in singletons by infertility diagnoses and treatment modalities: a population-based study