Fetal intracranial tumors are rare and their evolution is usually poor. With routine use of antenatal ultrasound imaging, a larger number of such tumors have been diagnosed.

During the period from January 1992 to January 2002, 18 cases diagnosed as intracranial tumors in the fetal stage were treated in the Neurosurgery and Obstetrics Departments of the Federal University of São Paulo and in the Fetal Medicine Service of the Maternity Hospital Santa Joana.

The tumors most frequently found were those of the choroid plexus and teratomas. Out of those 18 cases, 11 patients presented with fetal hydrocephalus, and 5 of them, who were less than 34 weeks old (gestational age), underwent repeated cephalocenteses while awaiting better conditions for delivery. Two fetuses died while in utero before any intervention had taken place and 16 underwent craniotomy after birth. Twelve of those patients are still alive, 9 of whom are considered normal. The 3 others are slightly or moderately retarded. 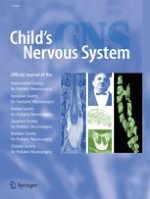 Features of the developing brain