The “developmental origins of health and disease” (DOHaD) hypothesis proposes that environmental conditions during fetal and early post-natal development influence lifelong health and capacity through permanent effects on growth, structure and metabolism. This has been called ‘programming’. The hypothesis is supported by epidemiological evidence in humans linking newborn size, and infant growth and nutrition, to adult health outcomes, and by experiments in animals showing that maternal under- and over-nutrition and other interventions (e.g., glucocorticoid exposure) during pregnancy lead to abnormal metabolism and body composition in the adult offspring. Early life programming is now thought to be important in the etiology of obesity, type 2 diabetes, and cardiovascular disease, opening up the possibility that these common diseases could be prevented by achieving optimal fetal and infant development. This is likely to have additional benefits for infant survival and human capital (e.g., improved cognitive performance and physical work capacity). Fetal nutrition is influenced by the mother’s diet and body size and composition, but hard evidence that the nutrition of the human mother programmes chronic disease risk in her offspring is currently limited. Recent findings from follow-up of children born after randomised nutritional interventions in pregnancy are mixed, but show some evidence of beneficial effects on vascular function, lipid concentrations, glucose tolerance and insulin resistance. Work in experimental animals suggests that epigenetic phenomena, whereby gene expression is modified by DNA methylation, and which are sensitive to the nutritional environment in early life, may be one mechanism underlying programming. 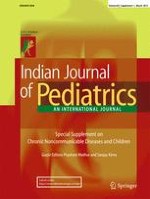 Nutrition Transition and Its Health Outcomes

Hypertension in Children and Adolescents: Epidemiology and Pathogenesis

Editorial: Strengthening the Role of Child Health Providers in Prevention of Noncommunicable Diseases