Burns in pregnancy can be a potentially life-threatening condition for both mother and baby. Human physiology is altered during pregnancy and burns add further stress leading to diminished maternal reserves. Very few studies have been reported for management of such patients.

This was a prospective based study carried out in Department of Burns and Plastic Surgery in collaboration with Department of Obstetrics and Gynaecology and Department of Pediatrics for a period of 20 months from December 2011 to July 2013. Pregnant women with thermal injuries more than 15% TBSA were included in the study. Patients with coexisting obstetrics complications and burns other than thermal were excluded.

Out of 3397 female patients of burns admitted, 1382 patients were in reproductive groups, 1116 were married and 67 were pregnant; these were enrolled. Maternal and fetal outcome is inversely linked with the TBSA of the mother (p < 0.001). In TBSA group 15–30%, there was no maternal and fetal mortality, but in TBSA >30–50% maternal mortality was 44%, and in 50–70% maternal mortality was 83% and no mother survived in >70%. In TBSA 30–50%, fetal mortality was 72%. Only one baby survived in 50–70% TBSA group and one in >70% TBSA group after intensive care in NICU for prematurity. Fetal survival was also dependent on gestational age, and there are better outcomes in late trimesters.

Maternal and fetal outcome are directly related to TBSA of mother, and best care can be offered to such patients with a multidisciplinary team-based approach. 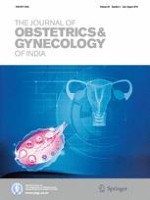 Is LNG-IUS the One-Stop Answer to AUB?

A Rare Case of Malignant Melanoma of Vagina