Receptor tyrosine kinase pathways are potential therapeutic targets in gastric adenocarcinoma patients. We evaluated HER2 and cMet protein expression, and FGFR2 gene amplification to assess their prognostic significance, and downstream mediators pS6 and pERK for their potential utility as pharmacodynamic biomarkers in patients with gastric adenocarcinoma. Tissue microarrays were constructed from resection samples of 184 patients who underwent surgery for gastric/gastro-oesophageal junction adenocarcinoma. Tissue cores were obtained from the tumour body (TB), luminal surface (LS) and invasive edge (IE), and immunohistochemical and fluorescence in situ hybridisation (FGFR2) analysis was performed. FGFR2 amplification was identified in 2 % of cases and associated with worse survival (P = 0.005). HER2 overexpression was observed in 10 % of cases and associated with increased survival (P = 0.041). cMet overexpression was observed in 4 % of cases and associated with worse survival (P < 0.001). On multivariate analysis, only cMet retained significance (P = 0.006). pS6 and pERK expression were observed in 73 % and 30 % of tumours, respectively, with no association with survival. HER2 (P = 0.004) and pERK (P = 0.001) expression differed between tumour regions with HER2 expression increased in the LS compared with the TB and IE. These findings confirm subpopulations in gastric adenocarcinoma with poor outcome that may benefit from specific therapeutic strategies. However, we found heterogeneous HER2, pS6 and pERK overexpression, which presents challenges for their use as predictive biomarkers in gastric biopsies. The potential downstream pharmacodynamic markers pS6 and pERK were expressed across tumour regions, providing evidence that resections and biopsies would yield comparative results in clinical trials. 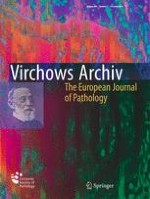