Fibroblast Growth Factor Receptor 4 (FGFR4) was proposed to hold prognostic significance in high-grade serous ovarian carcinoma (HGSOC). However, information on this deriving from large, representative patient panels is still missing, though such data would be indispensable to validate suitability of FGFR4 as prognostic marker or even pharmacological target.

FGFR4 was positively associated with advanced FIGO stage, high grade and presence of residual disease. When progression free (PFS) of FGFR4 negative vs. positive patients was compared, patients scored as FGFR4 positive had significantly shortened PFS as compared to those that stained negative. All associations of FGFR4 and shortened PFS were lost during multivariate testing. No significant associations were found in terms of OS.

We were not able to confirm FGFR4 as an independent negative prognosticator as described before. However, FGFR4 was highly prevalent in those cases harboring residual disease after debulking surgery. Since especially patients that could only be debulked sub-optimally may benefit from targeted adjuvant treatment, tyrosine kinase inhibitors targeting FGFRs might turn out to be an interesting future treatment option. 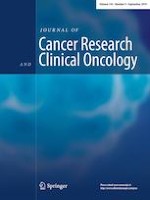 Correction to: Histone deacetylase inhibitor ITF2357 (givinostat) reverts transformed phenotype and counteracts stemness in in vitro and in vivo models of human glioblastoma