Fibrocalculous pancreatic diabetes (FCPD) is a unique form of diabetes due to non-alcoholic chronic pancreatitis peculiar to tropical countries. The hallmark features are younger age of onset pain abdomen and presence of pancreatic calculi. Though etiology remains unclear but on long-term follow-up, patient may develop microvascular and macrovascular complication. Chances of progression to malignancy are also high which carries poor prognosis. We present a case of a 36-year-old female presenting with recurrent abdominal pain, diabetes and chronic calcific pancreatitis. She was diagnosed to have FCPD based on her findings. She was managed with insulin, pancreatic enzyme supplementation and analgesics for pain relief. Due to her intractable pain poorly responding to medical management, she underwent Roux-en-Y pancreaticojejunostomy but later developed massive pericardial effusion hemorrhagic in nature with pleural effusion and ascitis. Analysis showed high possibility of adenocarcinoma though the primary focus could not be confirmed as the patient developed sepsis and unfortunately succumbed to her illness. Though FCPD is a rare entity, it is important to rule out chronic calcific pancreatitis as underlying etiology in all patients of diabetes presenting with recurrent pain abdomen and also to periodically screen FCPD patients for pancreatic malignancy. This helps to prevent progression to complications by an early medical intervention. Surgical intervention may be considered an option in case of failure of medical management, though data of its usefulness is very rare. 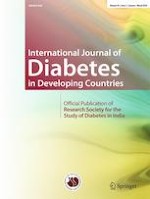 The ongoing epidemic of diabetes mellitus in India: genetics or lifestyle?