Chronic fluid overload contributes to cardiovascular morbidity in children with end-stage renal disease (ESRD) [ 1– 3]. Minimizing volume overload by optimizing the target weight in children’s dialysis prescriptions is therefore paramount. Prescription of target weight traditionally relies on clinical judgment together with the evaluation of parameters such as a history of intra-dialytic symptoms, inter-dialytic weight gain, physical examination and blood pressure. Practical tools to objectively assess fluid overload in infants and children with ESRD are needed to minimize chronic fluid overload and its associated morbidity.
A number of techniques are available to assess fluid overload in adults and children with ESRD, including bioimpedance spectroscopy (BIS) [ 4– 7], echocardiographic assessment of inferior vena cava (IVC) dimensions [ 8, 9] and lung ultrasound [ 10– 12]. The aim of this study was to evaluate the accuracy of these three techniques in detecting fluid overload in children with ESRD and to compare them with clinical measures, including weight, physical examination and systolic blood pressure.
Anzeige

A total of 22 fluid assessments were performed in 13 children. Two separate fluid assessments were performed in nine of these children, with each assessment representing different degrees of fluid overload. Single fluid assessments were undertaken in the remaining four patients, all of whom had stable fluid status and residual urine output of >25 ml/kg/day. At each assessment, all fluid-related variables were measured, with the exception of BIS, which was not performed in the two children aged <2 years. One child was obese with a body mass index of >95th centile for age. There were no associated technical difficulties in obtaining adequate lung ultrasound images to assess B-lines.
The children were assessed as clinically euvolaemic in 82 % of the physical examinations, as mildly clinically dehydrated in 14 % and as mildly overloaded in 4 %. No children were assessed as having moderate or severe clinical fluid overload at the time of the physical examination. Median fluid overload by weight for all assessments was 0.5 % (range −5.0 to 6.0 %). The median systolic blood pressure elevation above the 50th blood pressure centile was 6.4 % (range −20 to 52 %).
The median number of B-lines on the lung ultrasound image was four (range 0–26). The presence of up to five B-lines is considered to be a normal variant [ 21, 22]. Median indexed IVC diameters were 0.7 (range 0.2–1.0) cm/(kg/m 2) during inspiration and 1.39 (range 0.6–2.1) cm/(kg/m 2) during expiration. The median IVC collapsibility index was 50 % (range 25–83 %). BIS measurements showed a median overhydration of −0.6 % (range −4 to 2.0 %).
Anzeige
The number of B-lines on lung ultrasound images was the single parameter with the strongest linear correlation with fluid overload by weight ( r = 0.57, p = 0.005; Fig.  2). A similar positive correlation between B-lines and measured fluid overload was observed in both PD ( r = 0.61, p = 0.03) and HD ( r = 0.60, p = 0.06; Fig.  3). A non-significant but positive linear correlation with fluid overload by weight was also observed with the BIS measurement ( r = 0.43, p = 0.2), systolic blood pressure ( r = 0.19, p = 0.4) and clinical examination score ( r = 0.19, p = 0.4; Fig.  2). There was a non-significant negative linear relationship with IVC collapsibility index ( r = −0.24, p = 0.3; Fig.  2). No linear correlation was found with IVC diameter during inspiration and expiration or with mean IVC diameter ( r = 0.08, −0.14 and −0.05, respectively; Table 2).
Table 2
Correlation of fluid parameters with proportional increase in weight from the prescribed target weight
IVC, Inferior vena cava
×
×
The sensitivity of the observed correlation between B-lines on the lung ultrasound images and measured weight overload to changes in the target weight was examined. No significant changes in the correlation were observed with up to 5 % reduction in the target weight ( r = 0.57, p = 0.05 with reduction in target weight by 5 % of the measured weight). Bland–Altman analysis showed acceptable levels of agreement between B-lines and the gold standard comparator of fluid overload (Fig.  4).
×
A combination of three fluid parameters, namely B-lines, clinical examination and systolic blood pressure, best predicted fluid overload by weight in a multiple linear regression model ( R 2  = 0.46, p = 0.05). The final model with beta coefficients is summarized below:
$$ Fluid\kern0.5em overload\left( weight\kern0.5em \%\right)=0.55\ast Blines+0.07\ast clinicalexam+0.04\ast SBPincrement $$
where Blines =the total number of B-lines on the lung ultrasound image; clinicalexam = clinical fluid overload score (described above); SBPincrement = proportional increase in systolic BP above 50th centile (%).
The frequency of dissociation between BIS measurements and blood pressure was 36 %, with three of 11 measurements showing underhydration with elevated blood pressure, and one of 11 measurements showing overhydration with low blood pressure (Fig.  5a). For the lung ultrasound, four (18 %) of 22 readings showed more than five B-lines with low blood pressure (Fig.  5b). Six (27 %) IVC readings were discordant with blood pressure measurements (Fig.  5c). Physical examination showed the least dissociation with blood pressure in one (4 %) of 22 physical examination scores (Fig.  5d).
×
Anzeige

The ultrasound equipment for this study was provided on loan from FUJIFILM Sonosite UK.

The authors declare no conflict of interest

The study protocol conformed to the Declaration of Helsinki and was approved by a national research ethics committee. Parents provided written informed consent, and patients provided assent.
Open Access This article is distributed under the terms of the Creative Commons Attribution 4.0 International License (http://creativecommons.org/licenses/by/4.0/), which permits unrestricted use, distribution, and reproduction in any medium, provided you give appropriate credit to the original author(s) and the source, provide a link to the Creative Commons license, and indicate if changes were made. 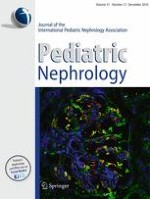 What is this chocolate milk in my circuit? A cause of acute clotting of a continuous renal replacement circuit: Answers

Can the new CKD-EPI BTP-B2M formula be applied in children?

An unusual cause of hypertension with hematuria and proteinuria: Answers