Sexual dysfunction is one of the most prevalent and distressing treatment-related side effects for both male and female cancer survivors. Survivorship care guidelines recommend therapeutic sexual aids to help improve sexual problems. However, little is known about the availability of sexual aids and resources at cancer centers.

Twenty-five comprehensive cancer centers affiliated with both the National Cancer Institute and the National Comprehensive Care Network were surveyed using the “mystery shopper” method to determine whether various types of sexual aids were available at the centers. Staffs from cancer center staff retail stores and patient boutiques were queried in separate telephone calls regarding the availability of these aids for and women.

Of the 25 centers contacted, 23 (92%) responded about aids for men, and 22 (88%) responded about aids for women. Eighty-seven percent of the centers reported having no sexual aids available for men, and 72% of centers reported having no aids available for women. The most common advice given to mystery shoppers was a suggestion to use the internet. Only one center had numerous aids/resources for both men and women.

The large majority of cancer centers reported having no sexual aids or other sexual health resources available for men or women.

Results underscore the widespread lack of resources to promote sexual health rehabilitation at major cancer centers, both for male and female survivors. 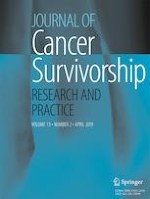 High-intensity interval training in the therapy and aftercare of cancer patients: a systematic review with meta-analysis

Prostate cancer and subsequent nutritional outcomes: the role of diagnosis and treatment

Trends of online patient-provider communication among cancer survivors from 2008 to 2017: a digital divide perspective