The study aim to demonstrate the therapeutic tissue depth of photodynamic therapy (PDT) using the photosensitizer talaporfin sodium and semiconductor laser for malignant glioma from an autopsy finding. Three patients diagnosed with glioblastoma by pre-operative imaging (1 newly diagnosed patient and 2 patients with recurrence) were treated with intra-operative additional PDT and adjuvant therapy such as post-operative radiotherapy or chemotherapy. All three patients died of brain stem dysfunction owing to cerebrospinal fluid dissemination or direct invasion of the tumor cells from 13, 18, or 20 months after PDT. Antemortem magnetic resonance images demonstrated no tumor recurrence in the site of PDT, and autopsy was performed for the pathological analysis. Macroscopic observation demonstrated no tumor recurrence in two patients, but one patient demonstrated tumor recurrence in the therapeutic depth of PDT. Microscopic analysis demonstrated histopathological changes reaching depths of 9, 11, and 18 mm (mean: 12.7 mm) from the surface of the cavity of tumor resection, suggesting the therapeutic tissue depth of PDT to be in this range. This region demonstrated glial scarring with infiltration of T lymphocytes and macrophages, with slight degeneration of small vessel walls. However, viable tumor tissues were observed beyond or around the therapeutic tissue depth of PDT in two patients. PDT for glioblastoma prevented early local recurrence, which suggests the possibility that activation of the immune mechanisms was involved. The therapeutic tissue depth was suggested to be 9–18 mm from the surface of the cavity of tumor resection; however, the viable tumor tissues were demonstrated beyond this therapeutic range. 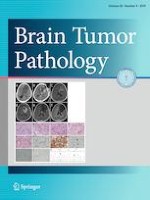 Anaplastic pleomorphic xanthoastrocytoma associated with an H3G34 mutation: a case report with review of literature