A total number of 407 patients were blindly allocated into two treatment groups [group 1 (VPT/CEM, n = 205) and group 2 (RCT, n = 202)] treated in 23 health-care centers by calibrated dentists. The treatment outcomes were assessed after 60 months.

The 5-year results revealed no significant differences in the successes of both study arms (P = 0.29); a total number of 271 patients were available (~33 % were lost to follow-up). The patients’ age/gender did not affect the outcomes; the presence of preoperative periapical lesion also did not implement a significant effect in both groups (P > 0.05).

As an alternative for RCT, VPT/CEM can be considered as a valid treatment for vital mature permanent molars clinically diagnosed with irreversible pulpitis.

Considering the favorable outcomes of 6- to 60-month follow-ups, as an evidence-based/simple/affordable/effective/biologic approach in cases of irreversible pulpitis, VPT/CEM is highly recommended for universal clinical practice. 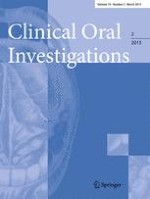 Influence of surface treatment on osseointegration of dental implants: histological, histomorphometric and radiological analysis in vivo