Cerebrospinal fluid (CSF) is thought to flow into the brain via perivascular spaces around arteries, where it mixes with interstitial fluid. The precise details concerning fluid outflow remain controversial. Although fluid dynamics have been studied in the brain, little is known about spinal cord fluid inflow and outflow. Understanding the normal fluid physiology of the spinal cord may give insight into the pathogenesis of spinal cord oedema and CSF disorders such as syringomyelia. We therefore aimed to determine the fluid outflow pathways in the rat spinal cord.

A fluorescent tracer, Alexa-Fluor®-647 Ovalbumin, was injected into the extracellular space of either the cervicothoracic lateral white matter or the grey matter in twenty-two Sprague–Dawley rats over 250 s. The rats were sacrificed at 20 or 60 min post injection. Spinal cord segments were sectioned and labelled with vascular antibodies for immunohistochemistry. 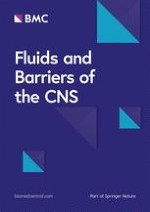 Paradigm-shift: radiological changes in the asymptomatic iNPH-patient to be: an observational study