The aim of this study was to characterize continuous renal replacement therapy (CRRT) utilization on extracorporeal membrane oxygenation (ECMO) and to determine the association of both fluid overload (FO) at CRRT initiation and fluid removal during CRRT with mortality in a large multicenter cohort.

Retrospective chart review of all children < 18 years of age concurrently treated with ECMO and CRRT from January 1, 2007, to December 31, 2011, at six tertiary care children’s hospital. Children treated with hemodialysis or peritoneal dialysis were excluded from the FO analysis.

In a multicenter pediatric ECMO cohort, this study demonstrates that severe FO was very common at CRRT initiation. We found an independent association between the degree of FO at CRRT initiation with adverse outcomes including mortality and increased duration of ECMO support. The results suggest that intervening prior to the development of significant FO may be a clinical therapeutic target and warrants further evaluation. 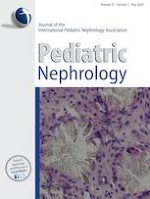 Psychosocial considerations and recommendations for care of pediatric patients on dialysis

Proptosis in a child with chronic kidney disease: Questions