We aimed to assess the feasibility of a novel hybrid endoscopic/laparoscopic non-exposed, full-thickness, single-wall gastric resection technique guided by a fluorescence lymphangiography to identify the lymphatic pathway and the sentinel node basin.

Eight large white pigs (4 acute and 4 survival models) were included. Indocyanine green was injected submucosally around a pseudo-tumor at four points (1 ml, 0.1 mg/ml). The lymphatic spreading pathway was identified by the means of near-infrared (NIR) laparoscopic camera, and the resection line was planned outside of the fluorescent signals, to include all the potential lymphatic channels. Lymph node (LN) dissection was performed at greater curvature side and the infrapyloric area preserving the infragastric artery for all pigs. At the lesser curvature, 3–4 branches of the gastric artery were preserved in all acute and in two survival (group A), while in the remaining animals, 1–2 branches were preserved (group B). Perfusion of the remaining stomach was examined by NIR angiography. The gastric motility and function were evaluated by the means of a dynamic MRI immediately after the procedure and repeated after 1 week in surviving animals.

The hybrid full-thickness resection with bilateral sentinel LN basin dissection were successfully performed with no intra-operative or post-operative complications. The removed specimen was including all the area with florescent signal. The remaining stomach demonstrated a good perfusion at the NIR angiography. The dynamic MRI revealed a preserved emptying function in the acute animals and in the group A, and a loss of function in the group B.

Fluorescence-lymphangiography guided hybrid resection was feasible to remove a relatively large part of the stomach including the lymphatic spreading pathway and sentinel basin. The extent of dissection in the lesser curvature side can affect the post-operative function and further researches are warranted to optimize the concept. 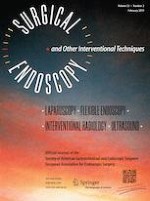 A systematic review of the learning curve in robotic surgery: range and heterogeneity