Nephrogenic syndrome of inappropriate antidiuresis (NSIAD), first described in 2005, is a rare genetic X-linked disease, presenting with hyponatremia, hyposmolarity, euvolemia, inappropriately concentrated urine, increased natriuresis, and undetectable or very low arginine-vasopressine (AVP) circulating levels. It can occur in neonates, infants, or later in life. NSIAD must be early recognized and treated to prevent severe hyponatremia, which can show a dangerous impact on neonatal outcome. In fact, it potentially leads to death or, in case of survival, neurologic sequelae. This review is an update of NSIAD 12 years after the first description, focusing on reported cases of neonatal and infantile onset. The different molecular patterns affecting the AVP receptor 2 (V2R) and determining its gain of function are reported in detail; moreover, we also provide a comparison between the different triggers involved in the development of hyponatremia, the evolution of the symptoms, and modality and efficacy of the different treatments available. 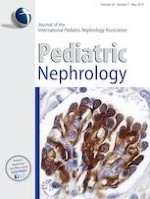 IgA nephropathy: is a new approach beyond proteinuria necessary?