UGT1A1 *28 and *6 polymorphism is associated with reduced enzyme activity and severe toxicities of irinotecan, especially in patients with homozygous or heterozygous for UGT1A1*28 or *6 polymorphism for both UGT1A1*28 and *6 (double-variant-type of UGT1A1 polymorphism, UGT1A1-DV). FOLFIRINOX is one of the standard treatments for metastatic pancreatic cancer (PC). The optimal dose of irinotecan as a component of the FOLFIRINOX has not been established yet for patients with UGT1A1-DV.

Based on our findings, we recommend that in Japanese advanced PC patients with UGT1A1- DV treated with FOLFIRINOX, irinotecan be administered at an initial dose of  ≤ 120 mg/m2. 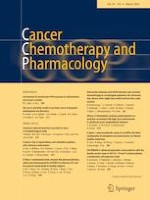 A Phase 1 randomized study compare the pharmacokinetics, safety and immunogenicity of HLX02 to reference CN- and EU-sourced trastuzumab in healthy subjects

A phase 1 pharmacokinetic study of oral NEPA, the fixed combination of netupitant and palonosetron, in Chinese healthy volunteers