The subcutaneous ICD is a promising treatment option in patients at risk for sudden cardiac death. Approved in 2009, the first S-ICD® in Germany was implanted in June 2010. Although large prospective registry studies have shown safety and efficacy of the system, there is a lack of long-term data with regard to battery longevity of the S-ICD®. Therefore, we report follow-up of our first initial S-ICD® cases from implantation till battery depletion.

All S-ICD® patients with device replacement for battery depletion in our large single-center S-ICD® registry were included in this study. Baseline characteristics, appropriate and inappropriate shocks, and complications were documented in a median follow-up of 75.9 ± 6.8 months.

Twenty-eight patients with S-ICD® systems were included in this study. Of these patients, 21 were male and 7 were female, with an overall mean age of 41.9 ± 12.6 years. Primary prevention of sudden cardiac death was the indication in 19 patients (67.9%). Ventricular tachycardia was adequately terminated in two patients (7.1%). In 7 patients, non-sustained ventricular arrhythmias were not treated. A total of three inappropriate shocks occurred in three patients (10.7%). Mean time from implantation till battery depletion was 65.8 ± 8.1 months. Only one patient presented premature elective replacement criteria because of rapid battery depletion. No lead-related complication occurred during follow-up and no complications were seen regarding device replacement. In one patient (3.6%), the system was explanted without replacement due to patient’s preference.

The estimated battery longevity of S-ICD® of about 5 years was reached in all but one patient. Compared to larger S-ICD® registry studies, frequency of inappropriate shocks was relatively high in the initial S-ICD® cases. Both technological improvement as well as programming and operators’ experience have led to a reduction of complications. Replacement of the S-ICD® seems to be a safe and effective procedure. 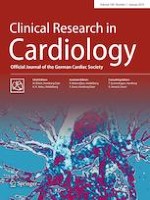 Butterfly and reverse butterfly: usefulness of a resistance band to provoke exercise-induced arrhythmias during catheter ablation in a patient refractory to pharmacological stimulation

Correction to: Heart Valve Disease Awareness Survey 2017: what did we achieve since 2015?

Long-term effects of iron deficiency in patients with heart failure with or without anemia: the RAID-HF follow-up study