While the number of forensic beds and the duration of psychiatric forensic psychiatric treatment have increased in several European Union (EU) states, this is not observed in others. Patient demographics, average lengths of stay and legal frameworks also differ substantially. The lack of basic epidemiological information on forensic patients and of shared indicators on forensic care within Europe is an obstacle to comparative research. The reasons for such variation are not well understood.

The data demonstrated substantial differences between states. Average length of stay was approximately ten times greater in the Netherlands than Slovenia. In England and Wales, 18% of patients were female compared to 5% in Slovenia. There was a 17-fold difference in forensic bed rates per 100,000 between the Netherlands and Spain. Exploratory analyses suggested average length of stay was associated with GDP, expenditure on healthcare and democracy index scores. 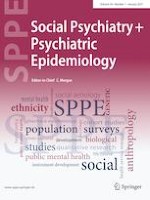 The association of community and individual parental social capital with behavior problems among children in Japan: results from A-CHILD longitudinal study

The violence prevention climate of mental health wards: a cross-sectional study of staff and patient views