Previous studies indicate that founder mutations may play a noticeable role in breast cancer (BC) predisposition in Russia. Here we performed a systematic analysis of eight recurrent mutations in 302 BC cases (St.-Petersburg, Russia), which were selected due to the presence of clinical indicators of hereditary disease (bilaterality and/or early onset (≤40 years) and/or family history). BC-associated alleles were revealed in 46 (15.2%) women. BRCA1 5382insC mutation was detected in 29 (9.6%) patients, CHEK2 1100delC in 9 (3.0%), BRCA1 4153delA in 3 (1.0%), CHEK2 IVS2+1G>A in 2 (0.7%), and BRCA1 185delAG, BRCA2 6174delT and NBS1 657del5 in 1 (0.3%) patient each. No cases with BRCA1 300T>G (C61G) mutation was identified. The obtained data suggest that a significant fraction of hereditary BC cases in Russia can be diagnosed using only a limited number of simple PCR tests. 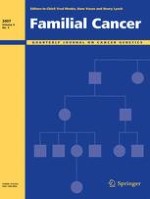 Hysteroscopic findings in women at risk of HNPCC. Results of a prospective observational study

Recurrent idiopathic pancreatitis in familial adenomatous polyposis: Report of a case-series and review of the literature

Adult weight gain and central obesity in women with and without a family history of breast cancer: a case control study