“Enhanced recovery after surgery” (ERAS) programs [ 1, 2], as opposed to “fast-track” postoperative protocols, are designed to provide a comprehensive pre- and postoperative clinical pathway that optimizes anesthesia and analgesia, limits surgical strain, facilitates early mobilization, and augments nutritional effectiveness. Several bariatric ERAS studies, including one randomized trial [ 3] and three meta-analyses [ 4– 6], have reported patient safety equivalent to standard postoperative protocols while achieving more rapid mobilization, briefer lengths of stay (LOS), decreased costs, and a faster return to normal activities [ 1, 7– 10]. Recent bariatric ERAS and fast-track studies report that anticoagulants are often administered prophylactically to all bariatric patients, and in higher doses to those with a body mass index (BMI) ≥ 40 kg/m 2 [ 11– 14]. The all-inclusive approach was confirmed as the norm in a 2017 systematic review and guideline published by the European Venous Thromboembolism Prophylaxis Task Force, in which a paucity of high-quality randomized controlled trials precluded their providing strong, specific thrombophylaxis recommendations [ 15].
During the 4-year development of our center’s bariatric ERAS protocol, we found that the use of thrombophylaxis selectively, only in morbidly obese postoperatively high-risk patients, was effective in ensuring safe outcomes while achieving more rapid mobilization [ 16]. The program’s evolution began in 2012 with a feasibility study of same-day discharge for patients undergoing laparoscopic adjustable gastric banding (LAGB). In this study, 6.5% of patients were successfully ambulatory with a low readmission rate (3/86, 3.5%). In 2013, we offered outpatient colectomy, publishing the results of this procedure in 2015 (LOS < 12 h, n = 20) [ 17]. In early 2017, we reported outcomes of a prospective patient series begun in 2012 ( n = 374) that incorporated a bariatrics-specific ERAS protocol, the first study of ERAS in morbidly obese patients undergoing omega loop gastric bypass (“mini” gastric bypass, MGB) vs laparoscopic sleeve gastrectomy (LSG) [ 16]. Time in the operating room was < 45 min, and mean LOS was 1.2 days, a briefer LOS than that reported in a meta-analysis of ERAS with bariatric surgery [ 6]. In 86.0% of patients, patients were discharged on day 1, with 96.9% discharged by day 2. Postoperative complications were low, 2.9%, with readmission in 2.1%, and reintervention in 1.3%. The ERAS program was equally successful in MGB and LSG. However, near the beginning of the series, several postoperative cases of hemorrhage were noted. We elected to stop administering postoperative low molecular-weight heparin (LMWH) routinely to all patients, and use it instead only in the subsequent patients with a Caprini Deep Vein Thrombosis (DVT) score of ≥ 3 [ 18].
Anzeige
The success of the adjusted protocol in the remainder of our original bariatric series appeared to confirm that postoperative LMWH was not necessary in patients at low risk of DVT (Caprini score < 3) [ 16]. Based on these findings, the current follow-on study was designed to assess outcomes in a prospective MGB and LSG cohort systematically treated using our bariatric ERAS protocol with the revised LMWH decision tree.

Patients ≥ 18 years old who met the accepted international criteria for bariatric surgery (i.e., US National Institutes of Health 1991 Guidelines, International Federation for the Surgery of Obesity (IFSO) standards) were included in this prospective cohort study. The ERAS clinical protocol was explained to patients by the surgeon in detail. Approval for inclusion in the study and written formal consent was obtained from each patient.

During the bariatric ERAS study, a nurse followed each patient personally. Patients were encouraged to be active agents of their own well-being instead of passive recipients of a surgical process. The detailed process of patients moving through the preoperative, operative, and postoperative ERAS protocol and follow-up, including the MGB and LSG procedures performed, and anesthesia and analgesia employed, has been described in detail in our original bariatric ERAS publication [ 16].

At the outset of our prior, original bariatric ERAS study, prophylactic LMWH was administered systematically to all patients. Due to the unsatisfactory development of several cases of postoperative hemorrhage, we altered the anticoagulation protocol in subsequent patients, with positive results: Incidence of hemorrhage was not increased in either MGB or LSG patients with a Caprini DVT score < 3 who, thus, did not receive LMWH [ 16]. Only those with a Caprini score ≥ 3 received LMWH thrombophylaxis from postoperative day 1 through day 10. The use of the revised ERAS thrombophylaxis decision tree, based on a Caprini score as determined post procedure in the operating room by the surgeon and anesthesiologist, is the basis for the current, prospective study of MGB and LSG.
Anzeige

In the current 1-year study of 485 morbidly obese patients undergoing bariatric surgery, the ERAS program employed was safe and effective with MGB and LSG. Mean LOS was less than the reported meta-analytic mean LOS for bariatric ERAS programs. The great majority of patients were discharged on day 1, and the remainder by day 2. Postoperative complications, readmissions, and reinterventions were low. The bariatric ERAS program with revised thrombophylaxis protocol stratifying administration of postoperative thrombophylaxis based on Caprini DVT risk level appeared to be safe and effective.
Obesity itself is a well-defined demographic risk factor for DVT; research suggests no increased risk of major hemorrhage with the use of prophylactic agents in bariatric surgery patients. Therefore, painstaking judgment must be used when opting not to use chemical prophylaxis against the potentially fatal complication of bleeding, particularly when the side effects of thrombophylaxis are minimal. Yet, minimizing complications due to bleeding from chemical thrombophylaxis is also a desired outcome. Thus, we recommend reduction or elimination of postoperative bariatric thrombophylaxis only under conditions identical to those employed in our tested and evolved ERAS protocol that features consultation in the operating room between both anesthesiologist and surgeon according to the Caprini score decision tree, and close daily patient follow-up for 10 days by a protocol-trained nurse. Randomized controlled studies of ERAS in bariatric surgery vs standard care are needed.

The study was performed in accord with the ethical standards of the Declaration of Helsinki.

Informed consent was obtained from all participants.
Open Access This article is distributed under the terms of the Creative Commons Attribution 4.0 International License (http://creativecommons.org/licenses/by/4.0/), which permits unrestricted use, distribution, and reproduction in any medium, provided you give appropriate credit to the original author(s) and the source, provide a link to the Creative Commons license, and indicate if changes were made. 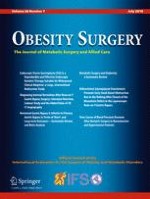 How Ethical Is Our Current Delivery of Care to Patients with Severe and Complicated Obesity?

Gastrogastric Fistula: an Unusual Cause for Severe Bile Reflux Following Conversion of Sleeve Gastrectomy to One Anastomosis Gastric Bypass

Reply to the Letter to the Editor: Anemia and Bariatric Surgery: Results of a National French Survey on Administrative Data of 306,298 Consecutive Patients Between 2008 and 2016

ABSI (A Body Shape Index) and ARI (Anthropometric Risk Indicator) in Bariatric Surgery. First Application on a Bariatric Cohort and Possible Clinical Use