The purpose was to evaluate indications and clinical outcomes in paediatric corneal keratoplasty.

Fifty-four eyes of 43 patients who underwent corneal keratoplasty from the 1st of January 2010 through the 31st of December 2013 at the Bambino Gesù Children’s Hospital in Rome, Italy, were retrospectively evaluated. To assess the effect of age on graft failure rate, the recipient age was considered as a dichotomous variable (≤5 or >5 years) and a 2X2 table was developed, using the chi-square test for testing the statistical significance. Furthermore, two separate subgroup analyses were conducted on patients of ≤5 years and those of >5 years, to evaluate the effect of penetrating keratoplasty (PK) or deep anterior lamellar keratoplasty (DALK) on the graft failure rate. The level of statistical significance was set at p < 0.05

Mean recipient age was 8.9 ± 5.7 [SD] years. Mean follow-up time was 22.8 months. Main preoperative diagnoses were keratoconus (37 %) and congenital glaucoma (20 %). Patients ≤5 years showed a higher percentage of graft failure (p = 0.0008). PK and DALK did not show statistically significant differences regarding the graft failure in both subgroups (p = 0.15 for ≤5 years group and p = 0.27 for >5 years group, respectively). However, across groups DALK provided a lower rate of graft failure.

Our findings suggest that children older than 5 years show a significantly better graft outcome and that DALK seems to offer greatest benefits in terms of failure risk in paediatric patients. 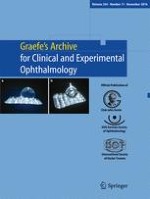