Because of its aggressive characteristics and poor prognosis, triple-negative breast cancer (TNBC) has become a hot topic in cancer research. Chemotherapy is currently the only treatment for patients with TNBC. The transcription factor FOXC1 has been associated with TNBC prognosis, but little is known about its effect on chemosensitivity. The aim of this study was to investigate the effects of FOXC1 on chemosensitivity.

A case–control study was performed on 25 TNBC patients who experienced relapse and/or metastasis. Another 25 patients without relapse or metastasis were randomly selected as controls. Medical records were reviewed for relevant information, and immunohistochemistry was performed to measure FOXC1 levels. The Kaplan–Meier method and Cox analysis were used to analyze differences in disease-free survival (DFS) and overall survival (OS). The correlation of FOXC1 expression with chemosensitivity was analyzed. Data were analyzed using SPSS 21.0 software, and a P value <0.05 was considered to be statistically significant. 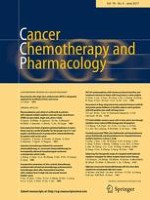 Hemodialysis does not impact axitinib exposure: clinical case of a patient with metastatic renal cell carcinoma

Pharmacokinetics and safety of carfilzomib in patients with relapsed multiple myeloma and end-stage renal disease (ESRD): an open-label, single-arm, phase I study

UGT1A1 polymorphisms with irinotecan-induced toxicities and treatment outcome in Asians with Lung Cancer: a meta-analysis