Shock wave lithotripsy is the only non-invasive stone therapy and in clinical use since 1980. In spite of decades with millions of patients treated, the mechanism of fragmentation is still under debate. Detailed knowledge of the fragmentation process is required for improvements regarding safety and efficiency. The purpose of this paper is to gain a deeper insight into the mechanism of fragmentation by drawing attention to basic physical laws of inertia and momentum transfer. Many fragmentation experiments are based on the overall efficiency of multiple shock waves in crushing kidney stones or artificial model stones utilizing small baskets or latex pouches. Due to the high dynamic nature of the fragmentation process, in vitro and in vivo, a detailed action of a single shock wave on a particular stone target is difficult to investigate. We utilized a bifilar stone suspension, which allowed us to observe horizontal movements of model stones, their return to the initial position and orientation for repeated exposure of separate identical shocks. The method does not describe the entire fragmentation process in detail but elucidates a mechanism, which may be effective throughout shock wave lithotripsy in general. Measurements on model stones in water revealed forces in the range of 370 N, acceleration values of 100,000–200,000 m/s2 (≈ 10,000 g) and gained momentum of 3.7 × 10− 4 kg m/s we consider sufficient to break most human urinary stones. Fracture patterns of repeated identical shock waves show typical features supporting spallation (Hopkinson effect) and the mechanism of momentum transfer. Schlieren and photo-elastic images provide a visual impression of spatial stress in a transparent acrylic glass cylinder, cavitation fields outside and at the surface of the cylinder, which are compatible with the inertia model. The proposed mechanism covers coarse as well as fine fragmentation. Collapsing cavitation bubbles may have an impact on the fragmentation process but although expected, a direct action of micro-jets on sample surfaces could not be detected. 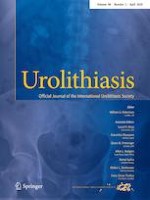 In vitro bactericidal effect of Ho:YAG laser and pneumatic lithotripsy on ureteral stones colonized with Escherichia coli and Enterococcus faecalis