Fragmented QRS complex (fQRS) on 12-lead ECG is associated with myocardial fibrosis and ischemic scar. Interstitial fibrosis is one of the histological characteristics of left ventricular diastolic dysfunction (LVDD). However, the clinical importance of fQRS in patients with LVDD remains unclear. Here, we assessed the hypothesis that the presence of fQRS is associated with disease severity in patients with LVDD, and could be used as an additional parameter to differentiate patients with heart failure with preserved ejection fraction (HFpEF) from LVDD. We analyzed 12-lead ECG of 239 patients with LVDD. The patients were divided into two groups according to the presence or absence of fQRS; 88 patients had fQRS (fQRS group) and 151 patients did not have fQRS (non-fQRS group). The percentage of patients with heart failure in the fQRS group was significantly higher than that in the non-fQRS group. The levels of B-type natriuretic peptide (BNP) and high-sensitive troponin T were significantly higher in the fQRS group than those in the non-fQRS group. In univariate logistic regression analysis, fQRS was associated with the presence of heart failure in patients with LVDD. Multivariate logistic regression analysis identified fQRS and BNP as independent indicators for HFpEF. In conclusion, the presence of fQRS on the ECG could be used as an additional tool to differentiate HFpEF from LVDD. 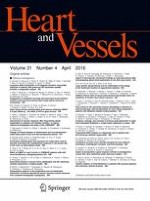