Radio-frequency (RF) signals from the most dominant scatterer in a dermis, i.e., collagen fibers, are collected as backscattered signals. We aim to confirm the frequency dependence of the spatial distribution of features in ultrasound images, as well as the attenuation coefficient (AC) and backscatter coefficient (BSC) of skin tissue without [LE (−)] and with lymphedema [LE (+)].

Measurement samples (n = 13) were excised from human skin tissue with LE (−) and middle severity LE (+). A laboratory-made scanner and single-element concave transducers (range 9–47 MHz) were used to measure RF data. A localized AC was computed from the normalized power spectrum using the linear least squares technique. The reflector method and compensation technique of the attenuation of tissue were applied to calculate the BSC. In addition, effective scatterer diameter (ESD), effective acoustic concentration (EAC), and integrated BSC (IBS) were calculated from the BSC as the benchmark to differentiate LE (−) and LE (+) tissues. 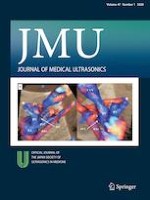