Central nervous system tumors in adolescents and young adults (AYA) are rarely reported in the literature. The association with cancer predisposition syndrome is not established. Programmed death ligand 1 (PD-L1) can predict the potential response of patients to immunotherapy. A link between mismatch repair protein deficiency (MMRP-D) and response to immunotherapy is established. P53 is reported to be positive in MMRD-D cases. We aim to investigate the frequency of MMRP-D in AYA with high-grade glioma and any potential association with PD-L1. A total of 96 cases were tested including 49 (51.0%) cases of glioblastoma. Six cases (6.25%) were MMRP-D, 17 (17.7%) were PD-L1 positive, mostly in grade IV tumors (8.7% in grade III compared to 26% in grade IV, p value = 0.027), and 69 (71.9%) were P3 positive. None of the MMRP-D cases expressed PD-L1. P53-positive cases were mostly MMRP proficient (n = 67; 74.4%, p value 0.051). Fourteen cases (28.7%) were positive for both PD-L1 and P53, while p53-positive grade IV tumors were mostly associated with negative PD-L1 (n = 29, 58%, p value = 0.043). MMRP deficiency does not appear to be prevalent in high-grade glioma in AYA. Expression of PD-L1 in a quarter of cases might suggest a role for immunotherapy in high-grade glioma. 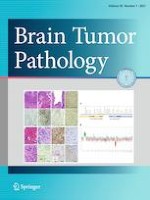