Background Potentially inappropriate prescriptions (PIP) are frequent, generate negative outcomes, and are to a great extent avoidable. Although there is general agreement about the definition of PIP, how to measure them is a matter of debate. Objective Our aim was to measure the frequency of PIP in older people at hospital discharge using two sets of criteria—Beers (2012 update) and STOPP. Setting A University Hospital in southern Spain. Method This cross sectional study involved a random sample of patients 65 years or more discharged from the University Hospital San Cecilio (Granada, Spain), from July 1, 2011 to June 30, 2012. Age, gender, length of hospital stay, type of hospital service, drugs prescribed and pathologies were obtained from discharge reports. Main outcome measure The main outcome measures were: (1) the prevalence of PIP according to each set of criteria (Beers and STOPP) and its 95 % confidence interval, globally and stratified for different categories of the study variables; (2) the degree of agreement between the two criteria using Kappa statistics; and (3) the drugs most commonly involved in PIP according to both criteria. Results There were 624 patients (median age 78) included in our study. According to Beers criteria, 22.9 % (19.6–26.2 %) of the patients had at least one PIP. This figure was 38.4 % (34.6–42.2 %) for STOPP criteria. Just 13.6 % of the patients had prescriptions simultaneously inappropriate for both criteria. Higher PIP frequency was observed in patients discharged from internal medicine. PIP increased with the Charlson Index and with the number of drugs prescribed, but not with gender, age or length of hospital stay. Conclusion A very high frequency of PIP at discharge was observed. By intervening in five drug groups, about 80 % of PIP might be avoided according to either of the two criteria. 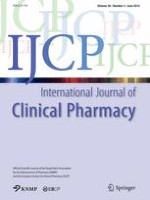 Establishing a pharmacy presence in the emergency department: opportunities and challenges in the French setting

Impact of generic substitution practice on care of diabetic patients