There is tremendous increase in obesity worldwide. Many factors including diet, life style, genetic, and epigenetic changes contribute to obesity. The fat mass and obesity-associated (FTO) gene polymorphisms are strongly associated with obesity. It has been reported that FTO single-nucleotide polymorphisms (SNPs) are associated with obesity in European populations; however, it was controversial in Chinese population. The present meta-analysis study was designed to investigate the association between FTO polymorphisms and obesity risk in Chinese population.

The investigators searched studies using the following databases: PubMed, web of science, and Cochrane Central Register of Controlled Trials. A random-effects model was used to calculate the pooled odds ratios (ORs). The heterogeneity among the studies was measured by I2 value. Subgroup analysis was used to find out the potential factors influencing the heterogeneity.

The present meta-analysis indicated that FTO SNPs are associated with obesity risk in both children/adolescents and adults in Chinese population. 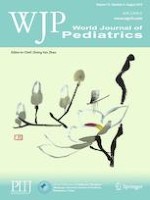 Impact of maternal smoking on the infant gut microbiota and its association with child overweight: a scoping review

Antibiotic use in early childhood and risk of obesity: longitudinal analysis of a national cohort

Big challenges: obesity and type 2 diabetes in children and adolescents