CYP2D6 is a critical pharmacogenetic target, and polymorphisms in the gene region are commonly used to infer enzyme activity score and predict resulting metabolizer phenotype: poor, intermediate, extensive/normal, or ultrarapid which can be useful in determining cause and/or manner of death in some autopsies. Current genotyping approaches are incapable of identifying novel and/or rare variants, so CYP2D6 star allele definitions are limited to polymorphisms known a priori. While useful for most predictions, recent studies using massively parallel sequencing data have identified additional polymorphisms in CYP2D6 that are predicted to alter enzyme function but are not considered in current star allele nomenclature. The 1000 Genomes Project data were used to produce full-gene haplotypes, describe their distribution in super-populations, and predict enzyme activity scores. Full-gene haplotypes generated lower activity scores than current approaches due to inclusion of additional damaging polymorphisms in the star allele. These findings are critical for clinical implementation of metabolizer phenotype prediction because a fraction of the population may be incorrectly considered normal metabolizers but actually may be poor or intermediate metabolizers. 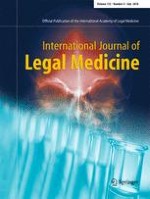 Detection of blood and DNA traces after thermal exposure

The comparative performance of PMI estimation in skeletal remains by three methods (C-14, luminol test and OHI): analysis of 20 cases