Oral cancer is the most common head and neck malignancy, and it is associated with a high recurrence rate and lymph node metastasis potential. YKL-40, also known as chitinase-3-like protein 1 (CHI3L1), is a secreted glycoprotein that serves as a biomarker in several diseases. It also plays a crucial role in regulating many characteristics of cancer, such as cell growth, migration, anti-apoptosis, and angiogenesis. Accumulating evidence supports the link between single-nucleotide polymorphisms (SNPs) and oral cancer, but no report on the association between CHI3L1 polymorphisms and oral cancer is available. Thus, the present study evaluated the contribution of CHI3L1 SNPs to oral cancer susceptibility and clinicopathology.

In conclusion, we found that the homozygous mutant allele of rs10399805 and rs6691378 appeared to have significantly lower risk of lymph node metastasis and associated with its mRNA levels in oral cancer.

The CHI3L1 polymorphisms rs10399805 and rs6691378 may act as biomarkers for predicting lymph node metastasis in oral cancer patients. 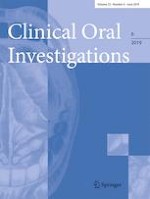 In vivo and in vitro assessment of the bleaching effectiveness of a brush-off patch containing 3.0% hydrogen peroxide