To investigate the association between fundus autofluorescence (FAF) and retinal structure and function in retinitis pigmentosa (RP).

For image acquisition, HRA2 (Heidelberg Engineering) and 3D-OCT1000 (Topcon Corp.) were used. Based on FAF examination, 88 eyes of 44 RP patients were categorized into three types. The area within the hyperautofluorescent ring and the area of preserved retinal autofluorescence with FAF was calculated. The association between the pattern of FAF and the residual area of the junction between the inner and outer segments of the photoreceptors (IS/OS line), and the relationship between the area within hyperautofluorescent ring, the area of preserved retinal autofluorescence and the mean deviation (MD) of static perimetry were assessed.

The residual IS/OS line can be found in the area inside the hyperautofluorescent ring and correlates with residual visual function. 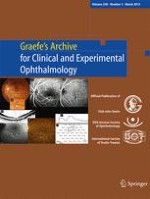 A branch retinal artery occlusion in a patient with Gaucher disease

Oxygen tension and gradient measurements in the retinal microvasculature of rats