The dopamine transporter (SLC6A3/DAT1) plays a key role in the regulation of dopaminergic neurotransmission and is the major site of action for methylphenidate, a first-line medication for attention deficit hyperactivity disorder (ADHD). Most genetic association studies with ADHD have investigated a 40-bp variable number of tandem repeats (VNTR) polymorphism in the 3′-untranslated region (UTR) of the DAT1, but these investigations have reported heterogeneous findings. The few studies focused on the 5′ region have reported promising results. Despite rs2652511 not being included, nor having any proxy SNP available in GWAS, the few candidate gene studies that analyzed it suggested an association with ADHD and schizophrenia. Here, we analyzed the −839 C/T (rs2652511) promoter variant and the 3′-UTR and intron 8 (Int8) VNTR polymorphisms in 522 adults with ADHD and 628 blood donor controls. The diagnostic procedures followed the DSM-IV criteria. A significant association was detected (P = 0.002) between the rs2652511 C-allele with ADHD. In addition, the 6-repeat allele of Int8 VNTR was associated with higher inattention scores (P = 0.034). The haplotype analysis including DAT1 3′-UTR and Int8 VNTR polymorphisms did not reveal associations with ADHD susceptibility or severity dimensions. These findings extend to adult samples previous findings from children samples on the role of the rs2652511 polymorphism in the promoter region of DAT1 as a risk factor for ADHD susceptibility. 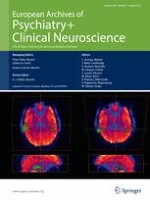 Fluid intelligence and empathy in association with personality disorder trait-scores: exploring the link

Do features of Mozart’s letter-writing style indicate the presence of a neuropsychiatric disorder? Controversies about the Bäsle letters

SPOCK3, a risk gene for adult ADHD and personality disorders