The online version of this article (https://​doi.​org/​10.​1007/​s00401-018-1857-4) contains supplementary material, which is available to authorized users.
Astrid Jeibmann and Uwe Karst contributed equally.

Recent studies showed gadolinium depositions following serial administrations of gadolinium-based contrast agents (GBCAs) for magnetic resonance imaging examinations in various parts of the brain with the dentate nucleus (DN) being most affected. Even though no clinical correlates of the deposits are known yet, an intensive debate developed if this might be harmful. The aim of the current study was to specify the gadolinium distribution in brain tissue of patients who received serial injections of GBCAs in the low-µm range and to explore any potential pathological tissue changes caused by gadolinium deposits. Thirteen autopsy cases—eight receiving GBCA administrations, five serving as controls—were identified and analyzed. For all patients, total gadolinium quantification after acidic digestion by means of inductively coupled plasma-mass spectrometry (ICP-MS) was performed. Six cases were utilized for the spatially resolved quantification of gadolinium within the cerebellum and the basal ganglia by means of high-resolution laser ablation (LA)-ICP-MS. Histopathological and immunohistochemical examinations were performed to determine tissue reactions. LA-ICP-MS revealed gadolinium depositions in the walls of small blood vessels of the DN in all GBCA exposed patients, while no gadolinium was found in the control group. Additionally, the detection of phosphorus and metals like copper, zinc and iron provides evidence that transmetalation reactions might have occurred. No significant pathological changes of the brain tissue in the vicinity of the DN with respect to micro-/astrogliosis and neuronal loss were found in any of the patients. This notably holds true even for a patient who died from nephrogenic systemic fibrosis exhibiting extremely high gadolinium concentrations within the DN. The findings show that gadolinium depositions in the brain are restricted to blood vessel walls, while the neuropil is spared and apparent cellular reactions are absent. 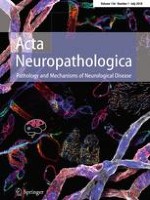 The lysosomal function of progranulin, a guardian against neurodegeneration