The online version of this article (doi:10.​1007/​s10585-014-9657-2) contains supplementary material, which is available to authorized users.
Manohar C. Dange, Nithya Srinivasan have contributed equally to this work

Interactions between molecules on the surface of tumor cells and those on the target organ endothelium play an important role in their arrest in an organ. Galectin-3 on the lung endothelium and high affinity ligands poly-N-acetyllactosamine (polyLacNAc) on N-oligosaccharides on melanoma cells facilitate such interactions. However, to extravasate and colonize an organ the cells must stabilize these interactions by spreading to retract endothelium, degrade exposed basement membrane (BM) and move into parenchyma and proliferate. Here, we show that galectin-3 is expressed on all the major compartments of the lungs and participates in not just promoting adhesion but also in spreading. We for the first time demonstrate that both soluble and immobilized galectin-3 induce secretion of MMP-9 required to breach vascular BM. Further, we show that immobilized galectin-3 is used as traction for the movement of cells. Downregulation of galactosyltransferases-I and -V resulted in significant loss in expression of polyLacNAc and thus reduced binding of galectin-3. This was accompanied with a loss in adhesion, spreading, MMP-9 secretion and motility of the cells on galectin-3 and thus their metastasis to lungs. Metastasis could also be inhibited by blocking surface polyLacNAc by pre-incubating cells with truncated galectin-3 (which lacked oligomerization domain) or by feeding mice with modified citrus pectin in drinking water. Overall, these results unequivocally show that polyLacNAc on melanoma cells and galectin-3 on the lungs play a critical role in arrest and extravasation of cells in the lungs and strategies that target these interactions inhibit lung metastasis. 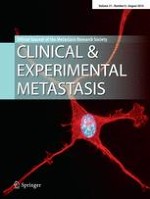