The study of the mechanisms of weight loss after bariatric surgery requires an animal model that mimics the human procedure and subsequent weight loss. A rat model eliminates the cognitive efforts associated with human weight loss and gain.

A technique for gastric bypass (Roux-en-Y gastric bypass [RYGB]) was developed in Sprague–Dawley rats. A 1- to 2-cc pouch is created from the uppermost stomach using a linear stapler. A 10-cm biliopancreatic limb and 15-cm Roux limb are anastomosed side to side with running nonabsorbable suture. The gastrojejunostomy is created with a single layer of running nonabsorbable suture. Four rats underwent RYGB. Weight loss was compared to four sham rats that had a midline incision and left 60 min with an open abdomen before closure.

A Sprague–Dawley rat model for gastric bypass has been developed and yields approximately 11% BW loss. This will allow investigators to objectively view factors associated with weight loss without the confounding cognitive factors in humans. 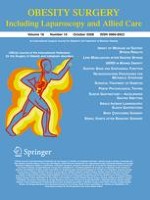 Laparoscopic Sleeve Gastrectomy without an Over-Sewing of the Staple Line