With 80 % of its population overweight, 47.5 % obese, and having the eighth fattest population worldwide, Kuwait has a serious obesity problem. This has led to widespread practice of bariatric surgery, with little or no studies regarding operative findings and patient follow-up. This study aims to identify the prevalent gastric histopathologies of the patients who have undergone laparoscopic sleeve gastrectomy (LSG) at Amiri Hospital, Kuwait.

A retrospective study was done of the gastric pathology specimen results of 656 patients who underwent LSG at Amiri Hospital from 2008 to 2012.

The majority of gastric histopathology results after LSG in this study had an element of chronic gastritis (74.4 %), which is in keeping with previous studies showing its high prevalence among the obese population. However, a few cases had clinically significant pathologies, and this may alter post-operative management. In view of these results, routine histological examination of the gastric specimens is highly recommended. 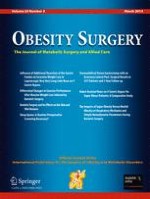 Concomitant Cholecystectomy During Laparoscopic Roux-en-Y Gastric Bypass in Obese Patients Is Not Justified: A Meta-Analysis