Standard gastrectomy with lymphadenectomy is recommended following endoscopic submucosal dissection (ESD) due to the risk of lymph-node metastasis for resected cancers. However, when lymphatic flows remain unchanged after ESD, a minimally invasive function-preserving surgery based on the sentinel node (SN) concept may be applicable. In this study, using porcine survival models, we aimed to investigate whether gastric lymphatic flows were modified following ESD.

Twelve pigs, each with one simulating lesion 3 cm in size, were used. Indocyanine green (ICG) fluid was endoscopically injected into the submucosa in four quadrants surrounding the lesion. Following laparoscopic observation of lymphatic flows, the lesions were resected by ESD. After 4 weeks, ICG fluid was injected in four quadrants surrounding the scar and lymphatic flows were observed in the same manner as the initial procedure. The distribution of lymphatic flows, including stained SNs, was compared. 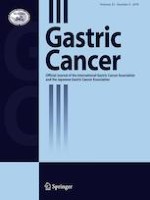 Unequal burden of mortality from gastric cancer in Brazil and its regions, 2000–2015