Gastric ulcers are one of the most common gastrointestinal disorders. The aim of this study was to investigate the gastroprotective activity and possible underlying mechanisms of palmatine against acetic acid-induced gastric ulcers in rats. Palmatine was administered orally for 7 consecutive days to treat ulcers. The ulcer area, ulcer inhibition rate, histological section, platelet-activating factor (PAF) level in serum, prostaglandin E2 (PGE2) level in gastric tissue, 5-hydroxytryptamine (5-HT) level in the brain and norepinephrine (NE) level in the adrenal glands were analyzed. Histological results showed that the ulcer areas were significantly decreased by both doses of palmatine (10 and 20 mg/kg/day) compared with the model group, and the ulcer inhibition rates were 51.42% and 60.92%, respectively. Palmatine treatment markedly increased the level of PGE2 and decreased PAF, compared with the model group; however, it had no significant effect on 5-HT and NE levels. The results indicated that palmatine may exert a gastroprotective effect against gastric ulcers, and the mechanisms might be associated with the anti-inflammatory status and the protection of gastric mucosa via increasing PGE2 and decreasing PAF rather than neurohumoral regulation through 5-HT and NE. Thus, palmatine is a potential drug for treatment of gastric ulcers. 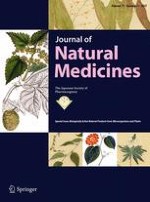