Incident reporting can be used to inform imaging departments about adverse events and near misses.

To study incident reports submitted during a 5-year period at a large pediatric imaging system to evaluate which imaging modalities and other factors were associated with a greater rate of filed incident reports.

All incident reports filed between 2013 and 2017 were reviewed and categorized by modality, patient type (inpatient, outpatient or emergency center) and use of sedation/anesthesia. The number of incident reports was compared to the number of imaging studies performed during that time period to calculate an incident report rate for each factor. Statistical analysis of whether there were differences in these rates between factors was performed.

Using incident report rates as a proxy for potential patient harm, the areas of our pediatric radiology service that are associated with the greatest potential for issues are interventional radiology, sedated patients, and inpatients. The areas associated with the least risk are ultrasound (US) and radiography. Safety improvement efforts should be focused on the high-risk areas. 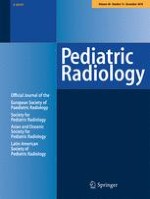 Current concepts and challenges in the radiologic assessment of brain tumors in children: part 2

Correction to: Inter- and intra-observer reliability of contrast-enhanced magnetic resonance imaging parameters in children with suspected juvenile idiopathic arthritis of the hip

Correction to: Comparative safety and efficacy of balloon use in air enema reduction for pediatric intussusception