In the description of 1 episode schizophrenia patients, female gender is associated with better social function and a higher degree of compliance, while males exhibit more negative symptoms and a higher degree of abuse. The question is raised whether gender specific differences exist which should be taken into consideration in order to provide optimal treatment for the patients.

Data from 269 persons (181 men and 88 women), included in the Danish national schizophrenia project (DNS), were registered at inclusion and year 2, and were analyzed according to gender, social functioning, psychopathology, drug consumption and abuse during the course of 2 years treatment.

The gender differences demonstrated in the study suggest gender specific treatment interventions in order to provide optimal treatment for both male and female patients. 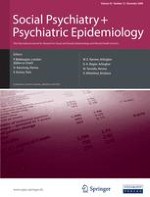 The generation gap in numbers: parent-child disagreement on youth’s emotional and behavioral problems

Self-harm in the UK

Perceived discrimination and the risk of schizophrenia in ethnic minorities