We evaluated the effectiveness of the Alcohol Use Disorder Identification Test (AUDIT) in screening for alcohol use disorder (AUD) among 500 men and women seeking HIV testing. Receiver operating characteristic (ROC) curve analysis was used to determine the utility of the AUDIT in discriminating between AUD caseness and non-caseness. For men, a cut-off score of 10 on the AUDIT predicted AUD with 81% sensitivity and 77% specificity. For women, a cut-off score of 7 yielded optimal sensitivity (82%) and specificity (82%). For men, the AUDIT yielded a positive predictive value (PPV) of 49% and a negative predictive value (NPV) of 94%; for women the PPV and NPV were 49 and 96%, respectively. While the AUDIT can be used to rapidly screen large numbers of men and women seeking HIV testing, the instrument’s low PPV indicates that individuals who screen positive may need to undergo further evaluation to detect cases of AUD. 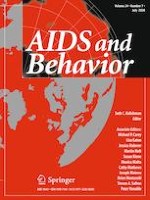 Notes From The Field

Clinical Care, Research, and Telehealth Services in the Era of Social Distancing to Mitigate COVID-19

Understanding Demand for PrEP and Early Experiences of PrEP Use Among Young Adults in Rural Kenya and Uganda: A Qualitative Study

The Influence of Relationship Dynamics and Sexual Agreements on Perceived Partner Support and Benefit of PrEP Use Among Same-Sex Male Couples in the U.S.

Neighborhood Poverty and Control of HIV, Hypertension, and Diabetes in the Women’s Interagency HIV Study

Notes From The Field