This study examines the current scenario of the self-reported prevalence of non-communicable diseases (NCDs) in India and states, with a gender perspective. It also explores different factors affecting the prevalence of NCDs among men and women.

The study has used data from recent NSSO (71st Round, 2014) survey. Simple bivariate analyses are used to calculate the prevalence rate of NCDs per thousand persons. Binary logistics regression is applied to examine the effects of demographic and socioeconomic variables on the prevalence of NCDs.

The overall prevalence of NCDs is 55 per thousand persons. The prevalence is higher among women (63) as compared to men (47). Among Indian states, difference in the prevalence of NCDs between men and women is the highest in Punjab (45), followed by Himachal Pradesh (44) and Uttaranchal (37), whereas among the union territories (UTs), Daman and Diu (230) shows the widest gap in the prevalence of NCDs between men and women. Rural women (86) are found at the higher risk of NCDs as compared to rural men (64) and their counterpart in urban areas (53). The NCD prevalence is significantly higher among the population aged above 60 years (OR = 8.30, p < 0.001) and in richer section (OR = 1.21, p < 0.001).

In India, women are disproportionately affected by NCDs as compared to men. Across the region, a large gap exists in NCD prevalence between men and women. Hence, there is an urgent need to address this issue in high NCD prevalent states, particularly focusing women from socio-economically disadvantaged background. 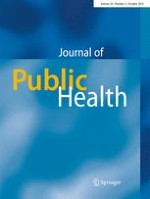 Severe tetanus in Malawi: where are the female patients?

The association between maternal nutrition and lifestyle during pregnancy and 2-year-old offspring adiposity: analysis from the ROLO study