Microarray analyses showed 49 significantly changed genes which were common to all the microarray experiments. There into, 14 genes were found to be in persistent up-regulation and 14 in persistent down-regulation 4 h after X-ray radiation when compared with the control group. These genes were involved in cell cycle and growth regulation, cell-apoptosis, chemokine, cell signaling, cellular stress response, angiogenesis, DNA synthesis and repair and cell adhesion. Eight randomly selected genes were validated by real-time PCR.

The genes of cancer-derived endothelial cells regulated by X-ray radiation as well as their related signal pathways, which obtained from gene expression profiling data, were relevant to radiosensitivity of endometrial cancer. This study shows that the identified genes and their related signaling pathways are candidated biomarkers for radiation and anti-angiogenesis of human endometrial carcinoma. 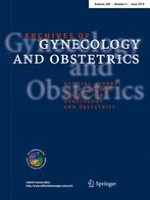 Management of cesarean scar pregnancy with suction curettage: a report of four cases and review of the literature

Tumor-free distance from outermost layer of cervix is of prognostic value in surgically treated cervical cancer patients: a multicenter study