Retinal ganglion cell (RGC) loss associated with thinning of the retinal nerve fiber layer without elevated intraocular pressure (IOP) occurs after the systemic administration of aldosterone. Since it is important to determine the mechanism of cell death independent of the IOP, we examined gene expression changes in the retina after the systemic administration of aldosterone.

Following subcutaneous implantation of an osmotic minipump into the mid-scapular region of rats, we administered an 80 μg/kg/day dose of aldosterone. Differences in the gene expression in the retina between normal rats and aldosterone-treated rats were investigated using microarrays. Real-time PCR was used to confirm the differential expression.

Significant increases and decreases were noted in several genes after the systemic administration of aldosterone. Further studies will need to be undertaken in order to definitively clarify the role of these genes in the eyes of animals with normal-tension glaucoma. 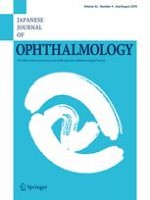 Clinical characteristics and ocular complications of patients with scleritis in Japanese

Correction to: The National Registry of Retinoblastoma in Japan (1983–2014)

Reliability of a commercially available heterochromatic flicker photometer, the MPS2, for measuring the macular pigment optical density of a Japanese population