This study assessed the possibility to build a prognosis predictor, based on microarray gene expression measures, in Stage II and III colon cancer patients.

Tumor and nonneoplastic mucosa mRNA samples from 12 colon cancer patients were profiled using the Affymetrix HGU133A GeneChip. Six of 12 patients experienced a metachronous metastasis, whereas the 6 others remained disease-free for more than five years. Three datasets were constituted, including, respectively, the gene expression measures in tumor samples (T), in adjacent nonneoplastic mucosa samples (A), and the log-ratio of the gene expression measures (L). The step-down procedure of Westfall and Young and the k-nearest neighbor class prediction method were applied on T, A, and L. Leave-one-out cross-validation was used to estimate the generalization error of predictors based on different numbers of genes and neighbors.

This study suggests that one can build a prognosis predictor for Stage II and III colon cancer patients, based on microarray gene expression measures, and suggests the potential usefulness of nonneoplastic mucosa for this purpose. 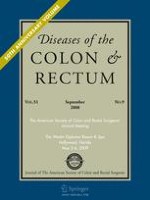 Colorectal Polyps in Carriers of the APC I1307K Polymorphism