The objective of this study was to assess the genetic diversity of porcine reproductive and respiratory syndrome virus circulating in Fujian province (southeastern China). Based on 53 ORF5 nucleotide sequences collected from nine sites, both highly pathogenic (sublineage 8.7) and lineage 1 strains were circulating in Fujian in 2009-2014 along with lineages 3 and 5.1. Notably, the lineage 1 strains were closely related to the NADC30 strain circulating in North America and were the predominant strains in 2014. In addition, we found that nonstructural protein 2 (NSP2) was the most variable nonstructural protein in Fujian isolates, with a 36-amino-acid (aa) insertion and seven different deletions detected in the 53 sequences examined. Similarly, analysis of GP5 amino acid sequences showed that the isolates were highly variable in primary neutralizing epitopes. Interesting, FJ3.2 and FJ7-2 strains have the mutation N44K, but they exhibited high replication and high titers in MARC-145 and PAM cells. The complete genome sequences determined for 12 type 2 isolates were 82.1-99.3% identical and were 15,016-15,407 nucleotides (nt), in length excluding the poly(A) tail. The strains also shared 88.2-99.4% identity with strain VR2332 (the prototype North American strain), 83.4-99.2% identity with strain JXA1 (the prototype high-pathogenicity Chinese strain), 88.2-97.1% identity with strain CH-1a (the prototype classical Chinese strain), and 82.9-97.1% identity with strain NADC30 (the prototype NADC30-like strain). Strikingly, phylogenetic and molecular evolutionary analyses indicated that strain FJW05 is a spontaneous recombinant between a circulating lineage 1 virus and the vaccine strain JXA1-R, which is derived from the highly pathogenic strain JXA-1. Collectively, the data highlight the epidemiology of porcine reproductive and respiratory syndrome in Fujian and may aid in selecting a suitable vaccine for use on pig farms. 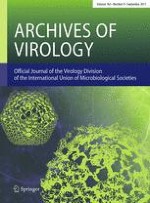