In this report, we present familial cases of urothelial carcinoma. To investigate the possibility of hereditary urothelial cancer, we performed semiconductor-based next-generation DNA sequencing. A woman in her 80s who had bladder and left ureteral cancer was hospitalized in Sapporo Shirakaba-dai Hospital due to consciousness disturbance. Radiographic evaluation revealed multiple liver metastases and she died 38 days later. Needle necropsy was done for a left ureteral tumor that continued to her bladder tumor and for liver metastases. At the same time, her son in his 60s, who also had muscle-invasive bladder cancer, was admitted to Sapporo Medical University Hospital and underwent neoadjuvant chemotherapy followed by laparoscopic radical cystectomy. DNA was isolated from both cancers and normal controls in each case and analyzed by massive parallel sequencing of 409 cancer-related genes using a targeted, multiplex PCR approach followed by semiconductor sequencing. Somatic mutations of KMT2C and KMT2D were detected in the mother’s tumor. Copy number gains of FGFR1, IkBKB, NFkB2, FGFR2, and FLT3 and copy number losses of IGF2R and TP53 were also found in her cancer. In her son’s tumor, somatic mutations of FGFR3 and EP300 were identified. Copy number gains of IkBKE/MAPK1/PARP1, EGFR, BRAF, IRS2, MAPK2K1, IGF1R, and ERBB2 and copy number loss of TP53 were also found in his cancer. There were no germline gene mutations related to familial urothelial carcinoma. Although somatic mutation of TP53 was a common feature, these cases with urothelial carcinoma might not be the result of a heredity syndrome. 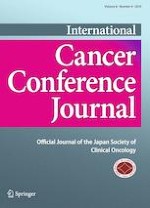