Gestational diabetes mellitus (GDM) is defined as glucose intolerance of varying severity and is present in about 2–6% of all pregnancies in Europe, making it one of the most common pregnancy disorders. Aside from the short-term maternal, fetal and neonatal consequences associated with GDM, there are long-term consequences for both mother and child. Although maternal glucose tolerance often normalises shortly after pregnancy, women with GDM have a substantially increased risk of developing type 2 diabetes later in life. Studies have reported that women are more than seven times as likely to develop diabetes after GDM, and that approximately 50% of mothers with GDM will develop diabetes within 10 years, making GDM one of the strongest predictors of type 2 diabetes. In women with previous GDM, development of type 2 diabetes can be prevented or delayed by lifestyle intervention and/or medical treatment. Systematic follow-up programmes would be ideal to prevent progression of GDM to diabetes, but such programmes are unfortunately lacking in the routine clinical set-up in most countries. Studies have found that the risks of obesity, the metabolic syndrome, type 2 diabetes and impaired insulin sensitivity and secretion in offspring of mothers with GDM are two- to eightfold those in offspring of mothers without GDM. The underlying pathogenic mechanisms behind the abnormal metabolic risk profile in offspring are unknown, but epigenetic changes induced by exposure to maternal hyperglycaemia during fetal life are implicated. Animal studies indicate that treatment can prevent long-term metabolic complications in offspring, but this remains to be confirmed in humans. Thus, diabetes begets diabetes and it is likely that GDM plays a significant role in the global diabetes epidemic. This review summarises a presentation given at the ‘Gestational diabetes: what’s up?’ symposium at the 2015 annual meeting of the EASD. It is accompanied by two other reviews on topics from this symposium (by Marja Vääräsmäki, DOI: 10.​1007/​s00125-016-3976-6, and by Cuilin Zhang and colleagues, DOI: 10.​1007/​s00125-016-3979-3) and an overview by the Session Chair, Kerstin Berntorp (DOI: 10.​1007/​s00125-016-3975-7). 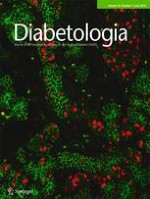 Erratum to: SGLT2 Inhibition and cardiovascular events: why did EMPA-REG Outcomes surprise and what were the likely mechanisms?

In vivo imaging of beta cells with radiotracers: state of the art, prospects and recommendations for development and use