Giant cell tumor of bone is a benign, locally aggressive neoplasm that is composed of sheets of neoplastic mononuclear cells interspersed amongst non-neoplastic, uniformly distributed, osteoclast-like giant cells. They represent approximately 4–5 % of primary bone tumors. Rarely, bone tumors have been noted to produce human chorionic gonadotropin, a finding most often reported in osteosarcoma. We present the case of a young woman who presented with a low-level human chorionic gonadotropin level which, after resection of her recurrent giant cell tumor of bone with secondary aneurysmal bone cyst-like change, became undetectable in her blood. Furthermore, cells within the aneurysmal bone cyst component were immunohistochemically positive for β-human chorionic gonadotropin. This is the first report of such a finding in the literature. 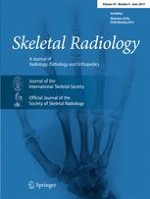