There is limited literature on Gilbert’s syndrome (GS) in children with persistent unconjugated hyperbilirubinemia from Indian subcontinent. All patients (< 18 y of age) with genetically confirmed GS were included, and their profile was analysed. A total of 170 subjects were confirmed as having GS as per genetic analysis (133 with homozygous and 37 with heterozygous status). Majority were diagnosed in the adolescent age group (mean age 13.6 y). The median serum total bilirubin (TB) levels were around 3.3 mg/dl with maximum levels reaching upto 18 mg/dl. Around 15% subjects had an associated condition including hematological or hepatobiliary disease amongst others. GS is an important but under-recognised cause of unexplained unconjugated hyperbilirubinemia in Indian pediatric subjects. It may co-exist with other hematological and hepatobiliary disorders, and complicate the clinical/laboratory picture. Extent of hyperbilirubinemia may fluctuate to levels much higher than what is usually described in current world literature. 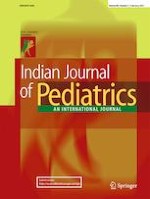